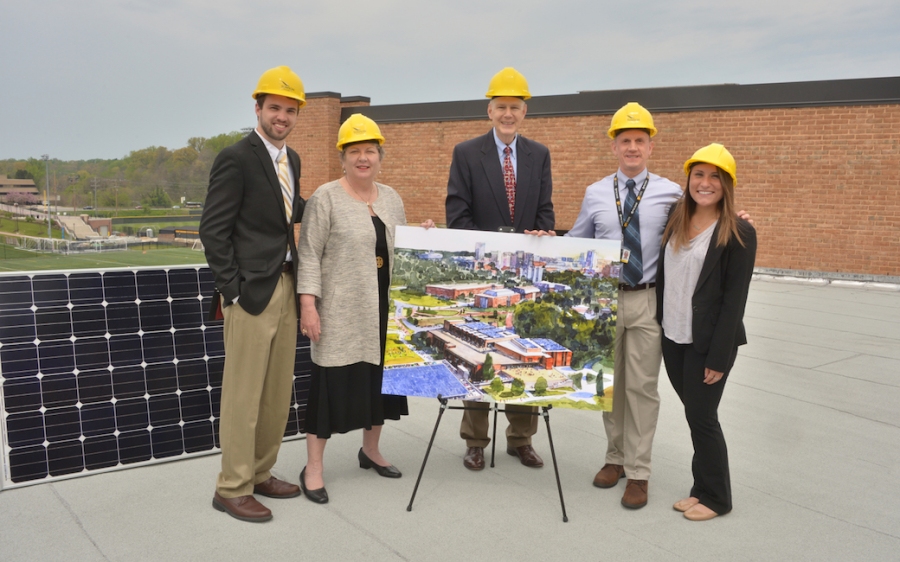 One of the main issues affecting college campuses nationwide is how they can become more sustainable. In the past ten years, Towson University has promoted sustainability on campus through five main initiatives implemented for the wellbeing of not only students but also the environment.

“With the cost of college and the demands on the students, we’re looking for ways to give them the experience that they need but also in a responsible way,” said Patricia Watson, campus planning and sustainability manager. “Because regardless of your major or whatever you’re doing, you have an opportunity to improve your environment.”

In the past ten years, the university has expanded the recycling program to push for more campus-wide recycling of paper goods. Recycling bins are provided throughout every building on campus, and are given to students to use within their dorm rooms. The university also competes in Recyclemania each year, a nationwide competition for recycling and waste minimization.

Composting has also been implemented on campus, provided a sustainable way to manage waste. Two dining places on campus, Susquehanna and Patuxent cafes, have made all of their silverware and Tupperware compostable. An initiative is also in the works for compost bins to be available within residence halls. This initiative is a major collaboration between different departments on campus, something necessary to making campus sustainable.

“I’m hoping that Towson evolves into more of a sharing community, whether it be knowledge, goods or volunteering,” Watson said. “I know that there’s a great foundation here but I’d love to see additional collaborations occur so that way we’re maximizing our resources.”

Towson also recently became a Bronze Level Bike university. Several construction plans and modifications now allow the campus to be more accessible by bike and improve the quality of green transportation. In addition, the university has pushed for increasing storm water awareness and its affects on the quality of water. Stream clean ups are regularly organized each month, and was also included during Towson’s The Big Event.

The university has expanded both in size and in student population over the years. With more students on campus, energy use by campuses nationwide has increased significantly. Despite this challenge, Towson has taken steps towards reducing its carbon footprint within Baltimore and promoting green initiatives on campus.

“I’m hoping to see Towson reach its goals,” Watson said. “Towson University in 2007 signed the College and President’s University Climate Commitment, with the pledge to become carbon neutral by 2050 so I’m looking forward to seeing us achieve that goal.”

So far, the university has been ahead of schedule, and may become carbon neutral well before 2050. However, the challenge of an expanding university and more energy use still threatens this goal.

“As the campus grows as the population grows we have to be mindful of the choices that we’re making both personally and as a campus.” Watson said.

This summer, the university is launching its first solar project, where solar panels will be installed throughout five buildings on campus. This initiative came directly from the Energy and Conservation Group, a student-led club on campus.

“No sustainability project can be done by one person,” Watson said. “It takes a lot of collaboration with a lot of players on campus, and it has to meet our requirements, needs, interests, and the students’ needs.”